From an intergender match to Sami Zayn’s protests against an alleged conspiracy, this week’s edition of WWE SmackDown featured many contrasting moments.

Last night’s SmackDown was quite an interesting show for fans who prefer segment-heavy episodes. WWE storylines progressed in creatively enticing ways through the medium of segments and promos, even if it meant that the in-ring product was slightly overshadowed this week.

Which show was better this week, RAW or SmackDown? Let us know your thoughts in the comments section below.

Here are the five biggest news stories from this week’s episode of WWE SmackDown (January 22, 2021).

#5. Cesaro impressed WWE viewers for a second consecutive week on the Blue brand

On the heels of Shinsuke Nakamura’s impressive performance in a gauntlet match, Cesaro seems to have picked up some huge momentum as well.

The Swiss Superman defeated Daniel Bryan in an impressive match on last week’s WWE SmackDown. Bryan came out this week to talk about his Royal Rumble aspirations.

However, he was eventually interrupted by Cesaro. The Leader of the ‘YES’ Movement challenged Cesaro to an impromptu rematch, but The Swiss Cyborg had no desire to face someone who he had beaten in the previous episode.

Instead, Cesaro issued an open challenge to anyone except Bryan. Dolph Ziggler answered the challenge, which led to an impromptu clash that resulted in Cesaro’s second straight singles victory on WWE SmackDown.

It was a bit strange that a bad guy like Ziggler, who is currently a SmackDown Tag Team Champion, would answer a heel Superstar’s one-on-one open challenge right away. Moreover, the clash did not benefit The ShowOff as he eventually lost against Cesaro.

The Swiss Superman seems to be on an upward path to success. The same goes for Shinsuke Nakamura, even if he wasn’t featured on the show this week. It will be interesting to see if both of these tag team partners will somehow collide against each other in singles action down the road.

Later in the night, Ziggler was seen talking to Sonya Deville backstage. While the details of their conversation weren’t revealed, it might not be a coincidence that Deville advised The Street Profits to take a break from in-ring action – due to Montez Ford’s injury – soon after. Moreover, backstage politics would make sense in this case since Ziggler and Deville already have an established history with each other.

#4. Sami Zayn’s quest to protest against WWE’s conspiracies led to a few entertaining encounters throughout the episode

WWE’s creative staff seem to have embraced Sami Zayn’s new conspiracy theory agenda. Zayn hasn’t won a single match in 2021 so far, with his latest defeat being in a one-on-one match against Apollo Crews last week.

Zayn walked down the ramp with his documentary crew in the first half of this week’s WWE SmackDown. The Great Liberator confirmed his entry into the upcoming Royal Rumble match, but he handcuffed himself to the barricade throughout the duration of several other segments on last night’s show.

It was amusing to see him protesting against WWE’s alleged web of conspiracies through creative signs. The former Intercontinental Champion also briefly interacted with a few other WWE Superstars like Cesaro, Sasha Banks, and Carmella, among others.

Sami Zayn’s arc for the night took the spotlight during Apollo Crews and Big E’s WWE Intercontinental Championship match. The Great Liberator removed his handcuffs and went inside the ring to deliver a Helluva Kick to Crews for the disqualification. Zayn also attacked Big E just to make a statement against the two men who are currently at the forefront of the Intercontinental Championship picture.

It was certainly an entertaining idea to include Sami Zayn on SmackDown the way they did this week. Zayn also ensured that his position in the Intercontinental title scene would remain intact over the next few episodes.

Bianca Belair and Bayley’s WWE SmackDown feud resulted in an obstacle course challenge on this week’s episode. The idea came about in the previous episode during Bianca Belair’s guest appearance on the inaugural edition of Bayley’s “Ding Dong, Hello!” Show.

Belair’s entire persona is primarily built upon her athleticism, which is why Bayley had to resort to petty shenanigans in the obstacle course challenge. Before Belair’s turn, Bayley ordered the crew to add higher hurdles. Also, Bayley had carried Chad Gable on top of her during the course, but it was revealed in a twist that Belair would have to carry Otis instead.

Gable and Otis were included creatively and efficiently in this segment, which was appreciable. Belair’s babyface character managed to overcome the odds as she defeated Bayley’s obstacle course time record, despite the shenanigans.

But The Role Model became a sore loser instead, as she attacked The EST of WWE after the challenge was over.

These kinds of competitions can become a little too gimmicky for entertainment purposes, but Bayley and Bianca Belair’s segment delivered on its premise during this week’s WWE SmackDown.

#2. Carmella’s sommelier showed off his athleticism in an intergender match against Sasha Banks on WWE SmackDown

For Carmella to stay afloat in the top title picture, her sommelier – Reginald – had to step up against Sasha Banks in the ring last night. Not a lot of wine waiters can be incredible athletes at the same time, but Reginald is certainly an exception to that trend.

For those unaware, Reginald was an acrobat who was a cast member for Cirque du Soleil’s “LUZIA” show before he joined WWE. So WWE capitalized on the opportunity to book an intergender match between Sasha and Reginald, where the latter could show-off his incredible athleticism without getting any in-ring offense.

This way, the aforementioned intergender bout could fit within WWE’s PG-environment. Despite Reginald’s athletic evasions against Sasha’s moves, The Legit Boss was able to tap him out with a Banks Statement.

As a result of Reginald and Sasha’s clash, a new layer of excitement was added to Carmella’s feud against the current SmackDown Women’s Champion.

Roman Reigns and Paul Heyman not only mocked WWE official Adam Pearce’s last-minute move to back out from a match against The Tribal Chief, but they also successfully baited him into a trap during this week’s main event.

Pearce, Reigns, and Heyman’s opening segment got to a point where Pearce disrespected Heyman. This led to an unexpected direction where Pearce vs. Heyman was booked in the main event, thanks to The Tribal Chief urging Heyman to defend his honor.

There was also a backstage moment between The Tribal Chief and his special counsel, where Reigns and Heyman pretended to be on different sides of the situation. It became a little predictable that Heyman would back out from the main event by using Pearce’s own ‘card subject to change’ strategy, but the backstage segment implied that Reigns wanted Heyman to fight his own battles.

Heyman faked an injury before the main event could begin, and Roman Reigns arrived to beat up Adam Pearce. Another plot thread running through this week’s WWE SmackDown was that Reigns had pulled backstage strings to keep Kevin Owens out of the building.

However, that strategy did not work effectively as The Prizefighter managed to sneak in anyway. Owens hit multiple stunners on the Universal Champion and put him through the commentary table at the end of this week’s WWE SmackDown.

This storyline has somewhat shifted in Owens’ favor on the Road to Royal Rumble 2021. But that is only because The Prizefighter had to be portrayed as the more dominant character at some point after so many encounters with Reigns. Moreover, Jey Uso was not present by Roman’s side this week for some reason.

The result of Owens vs. Reigns at the Royal Rumble event remains predictable, but it doesn’t mean that the storyline has run out of steam to a huge extent. The Prizefighter and The Tribal Chief’s feud has been thoroughly consistent in terms of acting performances and the matches. How will Roman Reigns retaliate against his nemesis on next week’s WWE SmackDown before Royal Rumble? 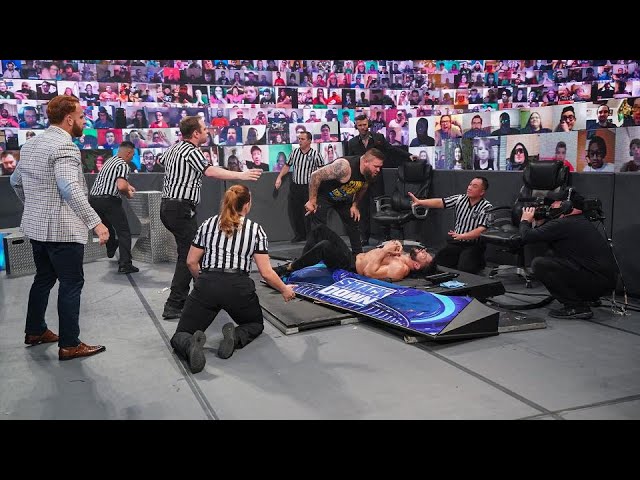 Do catch SK Wrestling experts Rick Ucchino and Denise Salcedo as they share their thoughts on all that went down during last night’s WWE SmackDown in the video linked above.