Goldberg’s son Gage is all grown up. In a new video that shows Goldberg training for WWE Royal Rumble, fans can see how different Gage looks. He seems like’ he’s in good shape, though he has a long way to go if he plans to achieve the kind of physique that Goldberg possesses.

In a video uploaded by WWE’s official YouTube channel, Gage can be seen alongside Goldberg while the legend prepares for his WWE Championship Match this weekend. WWE Hall of Famer Goldberg is a former WWE Universal Champion, and he was an iconic WCW wrestler. 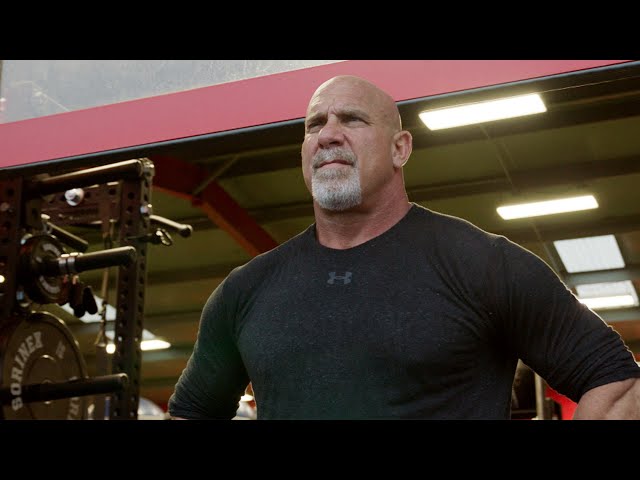 WWE Hall of Famer Goldberg is all set to face WWE Champion Drew McIntyre this weekend. In the video, the 54-year-old Goldberg is preparing his body for this major match with his younger opponent.

Moments into the clip, fans will notice Goldberg’s son Gage embracing his father in a wholesome moment. Gage has grown up, and looks he quite different from the last time fans saw him on WWE TV. Other stars are widely known as family men, but clearly Goldberg has a close relationship with his son, too.

Goldberg seems to be as determined as he’s ever been, judging by this training video. The WWE Universe might remember Gage from Goldberg’s 2016-17 run in WWE. After a 12-year hiatus, Goldberg returned to WWE in late 2016 to take on Brock Lesnar at WWE Survivor Series. After he squashed Lesnar in a matter of seconds, Goldberg celebrated in the ring with Gage.

A few months later, after a brief run with the WWE Universal Championship, Goldberg and his son Gage stood in the ring on WWE RAW. The WWE legend thanked the fans and hinted that he’d be back. Goldberg returned to WWE in 2019, and he took on The Undertaker in Saudi Arabia. Since then, he has been making occasional appearances in WWE.

If Goldberg defeats McIntyre at the Royal Rumble, he will win his very first WWE Championship. It’s unknown whether Gage is considering a wrestling career for himself in the near future. If he decides to become a wrestler, he will certainly get the best possible assistance and training from his dad.