Vince McMahon once talked Booker T into staying with WWE by offering to hire his wife, Sharmell, to work for the company.

In 2005, Booker T wanted to take a break from wrestling following his marriage to Sharmell. The two-time WWE Hall of Famer spoke to Vince McMahon about the situation and asked if he could leave.

Reminiscing about the meeting on Stories with Brisco and Bradshaw, Booker amusingly revealed how Vince McMahon reacted to his request.

“I told Vince I was gonna take a step back from the company. He was like, ‘Why would you wanna do that?’ I was like, ‘I think it might be best for my relationship, just getting married and whatnot.’ He was like, ‘Well, uh, why don’t we just hire Sharmell?’ I go in to quit and he ends up talking about hiring Sharmell!” Booker T said. 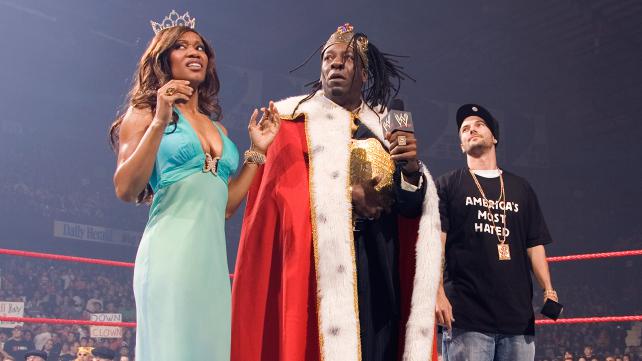 Booker T won the 2006 King of the Ring tournament and began referring to himself as King Booker. Sharmell also received a new name, Queen Sharmell, and performed as her husband’s valet.

While some WWE Superstars failed to capitalize on winning King of the Ring, Booker T fully embraced the role Vince McMahon gave him.

“I think they thought, ‘Why don’t we do the King of the Ring and make Booker the King and have the King and Queen?’ I give her [Sharmell] all the credit for making that happen, and I tell you this… I couldn’t have been the King that I was without Queen Sharmell. It would never have worked out,” he added.

Booker T and Sharmell left WWE in 2007 and joined IMPACT Wrestling. In 2011, Booker returned to Vince McMahon’s company as a commentator and analyst. He received his first WWE Hall of Fame induction in 2013 (individual) and his second in 2019 (Harlem Heat).