Several Attitude Era superstars have entered the WWE Hall of Fame in the past few years. Few others should also become Hall of Famers in 2022.

The Attitude Era started in late 1997 and lasted for nearly five years. It witnessed the rise of several legends like Kurt Angle, Trish Stratus, and Kane. Due to their incredible achievements, several Attitude Era superstars have entered the WWE Hall of Fame in the past few years, including Stone Cold Steve Austin, Shawn Michaels, and Triple H.

Meanwhile, a few other deserving legends are yet to enter the WWE Hall of Fame. Judging by their contributions, it is only a matter of time before they reserve their places among the other greats. Hence, next year seems like an opportunity to induct some of them into the Hall of Fame.

Here are five Attitude Era superstars, in no particular order, who should enter the WWE Hall of Fame in 2022.

The Undertaker joined WWE in 1990 after a short stint in WCW. The Deadman spent 20 years as an in-ring competitor in Vince McMahon’s company, during which he won seven world championships, among several other titles.

Although The Undertaker had spent two decades in WWE, the Attitude Era was probably his best period as a competitor. During that era, he played a part in some of the most famous storylines in WWE history. In late 1998, The Deadman formed The Ministry of Darkness, which became one of the best stables in the Attitude Era. It included several superstars like Bradshaw, Faarooq, Viscera, Mideon, Edge, Christian, and Gangrel.

Around the same time, The Undertaker also entered some of his best feuds with superstars like Kane and Mankind.

The 56-year-old’s most famous match came at the 1998 King of the Ring, in which he faced Mankind inside Hell in a Cell. The bout saw The Deadman throw his opponent off the top of the cell, which has become a defining moment in WWE history.

The seven-time world champion retired from in-ring action after defeating AJ Styles at WrestleMania 36. Since then, many fans and superstars have expressed their desire to see The Undertaker enter the WWE Hall of Fame.

Earlier this year, Hall of Famer Bubba Ray Dudley suggested WWE Chairman Vince McMahon should induct The Undertaker into the Hall of Fame in 2022.

“To me, that is an interesting piece of business on live pay-per-view: Vince McMahon inducting The Undertaker into the Hall of Fame. And maybe Night 1 [of WrestleMania 38] you get the last ride of The American Bada**, and Night 2 is when we get the induction and we get the full-blown entrance,” he said on Busted Open Radio.

The Phenom has not appeared in WWE since the 2020 Survivor Series. Nonetheless, recent reports suggested he might return to WWE television at WrestleMania 38.

Although she only spent nearly a year in WWE during the Attitude Era, Stacy Keibler was one of the most popular female superstars at the time.

Keibler signed with WWE after Vince McMahon purchased WCW in 2001. She then played a part in the Invasion angle. She joined forces with Torrie Wilson to feud with several superstars, including Trish Stratus, Lita, and Jacqueline. However, Keibler later turned on her friend. The two wrestlers feuded for several months.

In late 2001, Keibler also became the manager of the Dudley Boyz. Nonetheless, Bubba Ray and D-Von Dudley turned on her a few months later when she cost them a match. They put her through a table, marking the end of their alliance. In March 2002, Keibler took her next step in WWE, becoming Vince McMahon’s personal assistant and on-screen mistress on SmackDown.

A few months after the Attitude Era ended in mid-2002, Keibler left SmackDown for RAW. The former Duchess of Dudleyville continued to work in WWE until 2006 before leaving and retiring from professional wrestling.

In 2014, reports suggested that Stephanie McMahon was trying to bring Keibler back to WWE and even considered inducting her into the Hall of Fame. However, the rumors turned out to be false. 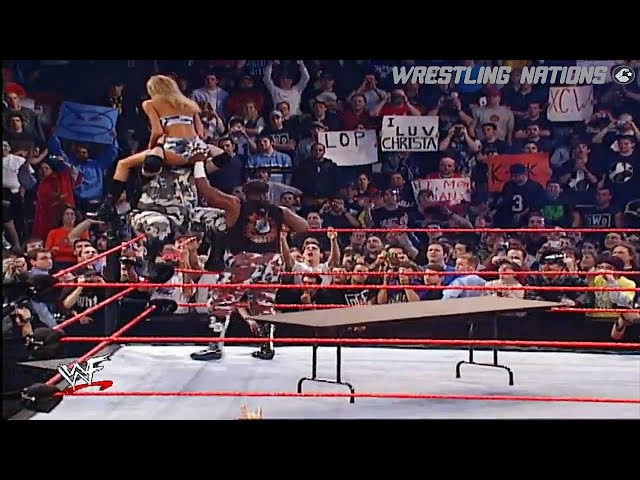 Despite this, Keibler made a rare WWE appearance two years ago to induct her best friend Torrie Wilson into the Hall of Fame.

Wilson and Keibler both had similar careers. Despite not winning any titles, they were two of the most popular and entertaining female superstars. Hence, it is logical that Keibler now follows in her best friend’s footsteps and enters the Hall of Fame in 2022.

Tajiri kicked off his WWE career in 2001 after the closure of ECW. He became WWE Commissioner William Regal’s assistant before making his in-ring debut at King of the Ring that same year.

During his first year in WWE, Tajiri feuded with a few superstars, including Billy Kidman and Regal. He also won the Light Heavyweight Championship, the WCW United States Championship, and the Cruiserweight Title multiple times.

The 51-year-old also became Torrie Wilson’s on-screen boyfriend during the Invasion storyline. Their segments were among the most entertaining at the time.

Tajiri continued to work in WWE after the end of the Attitude Era. He won a few more titles before leaving Vince McMahon’s company in 2005.

In the past few years, the Japanese wrestler made sporadic WWE appearances. In 2016, he briefly returned to the company. Nevertheless, he left again a few months later. His last bout came in 2017 when he defeated Sean Maluta on WWE 205 Live.

There is no doubt that Tajiri deserves recognition for his contributions to WWE. Many fans still remember the Japanese star’s unique style and dynamic in-ring work. WWE should seriously consider inducting the former Cruiserweight Champion into the Hall of Fame class next year.

Tajiri is still currently active in AJPW and Major League Wrestling. He is now the MLW World Middleweight Championship.

Sable joined WWE in 1996. According to her ex-husband, Marc Mero, WWE Chairman Vince McMahon hired her on the spot after seeing her at a meeting.

Sable debuted at WrestleMania 12 as Triple H’s valet. Nonetheless, she later split from The Game to become Mero’s manager.

Between 1996 and 1999, Sable was one of the most popular superstars on the WWE roster. WWE even acknowledged her growing popularity in a storyline in 1998. In late 1997, Mero spent a few months away due to injury. When he returned to WWE, he became jealous of Sable’s popularity and the couple eventually split. They then feuded with each other for a few months.

Sable also feuded with Jacqueline, who became Mero’s new manager. The two squared off for the newly-reinstated Women’s Championship in September 1998. Although Sable lost the bout, she defeated Jacqueline nearly a month later to capture the title. In May 1999, Sable lost her title to Debra. She then left WWE a month later.

The former Women’s Champion returned to Vince McMahon’s company in 2003. She played the role of McMahon’s on-screen mistress. Nevertheless, she quit again nearly a year later due to her then-boyfriend Brock Lesnar’s request.

Over the past few years, many fans and journalists have expressed their wish to see Sable inducted into the WWE Hall of Fame. Nearly a decade ago, reports suggested that the former Women’s Champion could enter the WWE Hall of Fame after Lesnar’s return to the company. However, it never happened.

Now that Lesnr is on good terms with WWE and several Attitude Era female superstars have already become Hall of Famers, it seems about time that Sable joins them.