Lesnar’s transformation has thoroughly entertained the former WWE Champion, who explained how it was part of The Beast Incarnate’s journey as a performer. Drew McIntyre stated that Brock Lesnar intentionally hid his jolly side from the masses as it was in stark contrast to his on-screen image.

The Scottish star was glad to see him finally open up and showcase a version of himself that fans never thought they’d see on WWE television.

“We’re getting it now, and it’s all part of the Lesnar journey and the Lesnar character arc that you knew he had this all along, and he has shown that serious side. People loved it at times; they hated it at times. And now they are getting a chance to see a little bit that Brock didn’t like to be revealed. That he can be a nice guy, he can be a funny guy. He kept that hidden as part of his presentation. For years, he didn’t want the world to know that, but now he is letting them in a little bit about how he is actually like. He is genuinely terrifying and a badass, but he can also be, you know, a good guy and highly entertaining. You get a character like Sami, and you put him with Brock; it’s just great TV,” said Drew McIntyre.

Brock Lesnar seems to be enjoying himself in his babyface role as the usually-serious superstar just can’t stop smiling on SmackDown.

Despite the drastic change in his former rival’s demeanor, Drew McIntyre found Lesnar a terrifying individual who savored beating up people in the ring.

“Brock’s come back, obviously reinvigorated. He has got that badass ponytail of his, that whole farmer outfit, and that big smile that is even more terrifying somehow than in the past. It’s so entertaining, but just when he smiles in his overalls or whatever, he is just somehow more terrifying than just standing there, being big and, you know, silent as Heyman did his talking for him. He is just coming out, having a good time, and what makes Brock happy is beating people up,” added McIntyre. 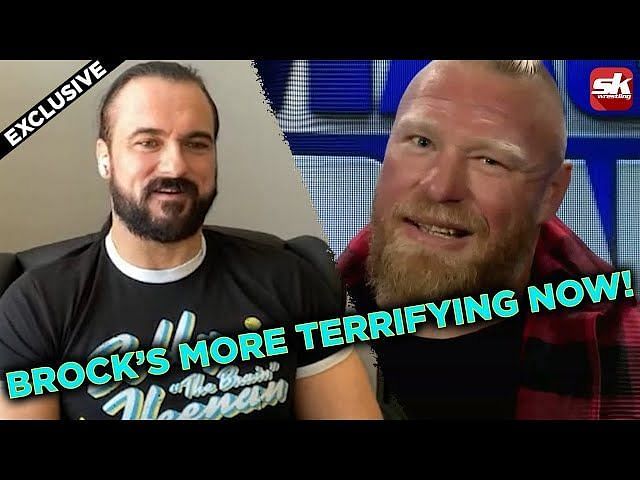 Brock Lesnar has been a revelation as a babyface

Brock Lesnar has been one of the most delightful aspects of WWE television ever since he returned at SummerSlam 2021 to confront Roman Reigns.

The Beast Incarnate’s segments with Sami Zayn have received universal praise in recent weeks on SmackDown. In addition to providing comic relief, the angles have done the job of improving the Universal Championship feud

Brock Lesnar will head into the Day 1 pay-per-view with retribution on his mind as he looks to dethrone The Tribal Chief. WWE fans should be prepared for a few swerves as the ongoing storyline is expected to continue until WrestleMania 38.

The good news is that viewers will get to see the brilliance of Brock Lesnar as a babyface for a few more months!