Welcome back to another edition of our daily WWE News & Rumor Roundup, where we take a look at all the most prominent stories doing the rounds in the wrestling world.

A WWE Superstar’s unforeseen decision to quit was one of the trending topics online, and we’ve gathered several backstage details regarding the shocking departure.

The Day 1 pay-per-view is knocking at the door. WWE has some big plans lined up for Roman Reigns and Brock Lesnar’s match, and the company might have already given away the finish with a recent listing.

WWE also reportedly rejected multiple ideas for Day 1 as officials initially wanted to present a new look to fans. There has also been an update on Rey Mysterio’s current status and the recent changes due to him being ‘banged up.’

Elsewhere, Drew McIntyre showered massive praise on a wrestling legend’s son, who he believed could be a main event player in the WWE.

On that note, let’s dive right into the latest WWE News & Rumor Roundup: 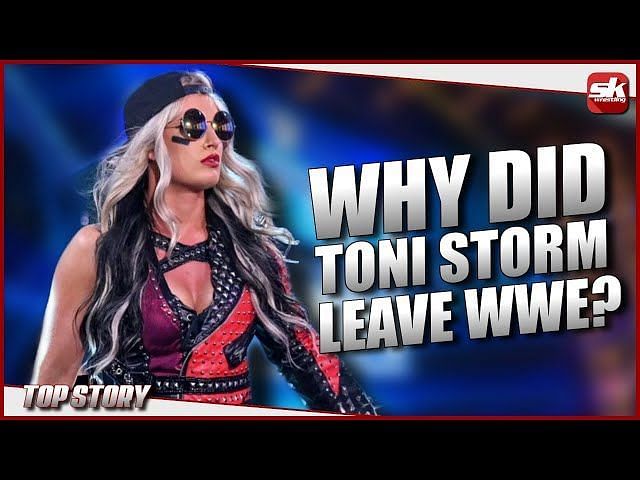 Toni Storm’s WWE release caught the entire wrestling community off guard as she was recently involved in a big storyline with Charlotte Flair on SmackDown.

As reported by Dave Meltzer, talent is under the impression that Toni Storm asked for her release due to professional burnout.

On Tuesday, Toni Storm worked at the WWE Live Event in Washington DC and surprisingly flew herself home after the show. The former NXT UK Women’s Champion later informed WWE about wanting to leave, and the company subsequently granted her the release.

Fightful, who first reported Toni Storm’s release, noted that the exit blindsided people within WWE. The memo sent out internally didn’t mention budget cuts as the reason, which has been the recent trend of layoffs in the company.

WWE’s lackluster booking of Toni Storm during her feud with Charlotte Flair might not have helped matters either as the babyface wasn’t presented strongly enough in the championship angle.

If this was the best WWE could come up with Toni Storm; maybe her talents will be more appreciated elsewhere.

The 26-year-old Aussie is yet to issue a statement on her release, and we’ll keep you updated regarding her status as she approaches free agency.

#4. Possible spoilers on WWE’s plans for Roman Reigns and Brock Lesnar at Day 1

Roman Reigns could retain the Universal Championship at Day 1 per WWE’s live event listings for January.

It was revealed that Drew McIntyre had been advertised to face the Universal Champion at multiple house shows later this month. While Brock Lesnar is not on a live event-based contract, Roman Reigns is expected to retain his title.

Reigns and McIntyre have faced each other in a few six-man tag matches at recent live events. The duo seems to be locked in for a feud after Day 1 and could have a title showdown at Royal Rumble 2022.

”McIntyre vs. the Universal Champion is scheduled for several shows in January, and while the card can always change, this would indicate that the plan is for Roman Reigns to retain the title this Saturday at Day 1 and defend it against McIntyre at the Royal Rumble PPV,” via the report said.

Roman Reigns vs. Brock Lesnar is a massive main event for WWE, and officials are extra cautious in protecting the match following the recent COVID-19 outbreak.

While Roman Reigns is predicted to win at Day 1, the belief is that the match will have an angle that eventually sets up a rematch at WrestleMania 38.

Feel free to share your Day 1 predictions in the comments section.

#3. Backstage update on Rey Mysterio being ‘banged up’

Dave Meltzer reports that Rey Mysterio needed a week off from in-ring action as his body was banged up from a few recent matches in WWE.

Rey and Dominik Mysterio were initially slated to face The Street Profits in the RK-Bronament finals on December 13th. However, members from both teams were down with injuries as Montez Ford had to miss TV time due to health-related concerns.

The father-son duo wrestled Otis and Chad Gable on December 6th, and Rey took a break from the ring until his return at the WWE SuperShow on December 18th.

Here’s what was reported regarding Rey Mysterio’s status:

Rey Mysterio was banged up from matches a few weeks back and had to take a week off but obviously returned the next week. When WWE announced the Street Profits vs. Mysterios match on 12/13 was off, and said it was due to injuries on both sides, it was Rey being hurt and Ford being out of action for health related reasons.”

The WWE Legend and his son finally had their match against Street Profits on the latest episode of RAW. Montez Ford and Angelo Dawkins emerged victorious and will face RK-Bro a.

The @WWEUsos are Ready for Day 1(Ish).

During a recent Sportskeeda Wrestling exclusive, Drew McIntyre revealed that he sees Bron Breakker as a potential main event star for the WWE.

McIntyre regularly watches NXT, and he recently caught a glimpse of AJ Styles’ segment for the brand. He pondered about the idea of returning to NXT and said he would love to face Rick Steiner’s son.

Drew McIntyre even got a closer look at Bron Breakker during WWE’s recent tour of Europe and was thoroughly impressed by the young superstar’s attitude.

The two-time WWE Champion urged Breakker to keep his feet on the ground and envisioned a bright future for the NXT star.

“I think I mentioned this to my wife last night. We had NXT on in the gym when we were working out. She said to me when she saw AJ on the screen, like; you think you’ll end up showing up because AJ was there, and I was just trying to think. Who logically would I come out and do something with? Maybe, Bron. We’ve spent some time in Europe. I got a chance to see him up close. To see his attitude, his work ethic, I’m very impressed. If he keeps doing what he’s doing, keeps his feet on the ground, you know he is going to be future main event player for us,” revealed Drew McIntyre.

Drew McIntyre has high hopes for Bron Breakker. Do you see the NXT 2.0 star becoming a huge draw on the main roster? We’d love to know your thoughts in the comments section.

Seth Rollins has had more than 1 incident with a disorderly fan. Don’t believe us? More details here