It’s time to take a look at all the biggest stories from WWE in the latest installment of our daily news roundup.

WWE announced the return of a recently released superstar, and it is rightfully one of the most trending topics on social media.

This week, the company also offered an explosive SmackDown episode, which featured a significant babyface turn after the cameras stopped rolling. Triple H also made his first TV appearance since suffering a cardiac event.

A WWE Hall of Famer also compared a rising NXT star to Brock Lesnar while discussing their wrestling style.

William Regal’s unforeseen WWE release has shocked the wrestling world, and the former NXT GM has finally broken his silence about ending his 22-year spell with the company.

Mickie James was the most unexpected name amongst the 18 participants announced for the Women’s Royal Rumble match.

The legendary female star was released from WWE in April 2021 and has since achieved a lot of success in other companies.

Mickie James is the reigning Knockouts champion, but as revealed by Sean Ross Sapp, she is not on a full-time deal with IMPACT Wrestling.

“WWE wanted it, Mickie wanted it, and IMPACT Wrestling’s philosophy is always to work with other major promotions to create buzz for the fans. Everything is signed and agreed with WWE and IMPACT Wrestling – the only question is whether or not Mickie will enter one of WWE’s most historic annual matches as the reigning Knockouts World Champion,” revealed D’Amore.

Mickie James’ most recent WWE stint didn’t end on the best of terms, making her upcoming return ever more surprising.

James is slated to defend her title against Deonna Purrazzo at the Hard to Kill event on January 8th, and there is a possibility that she will walk into Royal Rumble without the championship. 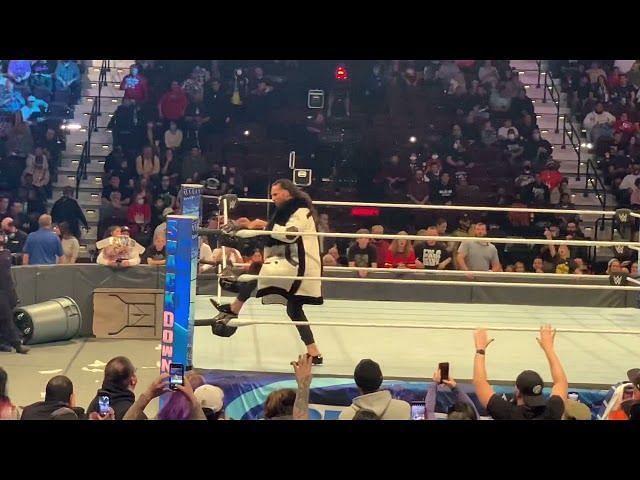 As announced on SmackDown, Roman Reigns will face Seth Rollins for the WWE Universal Championship at Royal Rumble.

WWE had another surprise for fans in attendance on SmackDown as Seth Rollins came out for a dark segment. The former WWE Champion was interrupted by The Usos, who attacked him after the episode went off the air.

WrestlingNews.co highlighted that Seth Rollins was in “full babyface mode” as he thwarted The Usos’ assault with kicks. The RAW star was apparently also playing to the crowd and looking for cheers while brawling with the SmackDown Tag Team Champions

Seth Rollins came out after the show and gave The Stomp to the Usos #SmackDown @WrestleFeatures @WrestleOps pic.twitter.com/SwB9UI33Fy

Seth Rollins seems set to temporarily play the babyface role as he prepares to battle his former Shield brother. The build-up to the highly-anticipated clash is shaping up to be must-watch TV.

I’ve been blown away by the outreach and support from so many people. I’m recovering, doing well, & deeply grateful for all the love in my life. Especially grateful for @ShawnMichaels & all the Superstars & crew @WWENXT! (Steph and the girls loved the snacks!)
See you soon 🙏❤️

Triple H has not been seen on any TV program since he experienced a severe cardiac event a few months back. The WWE Executive appeared on a recent edition of NBC News and opened up about the company’s NIL program.

WWE’s ‘Next In Line’ initiative was introduced to create a pathway for exceptional college athletes to find their way into professional wrestling. Triple H commented on the exciting new project and explained how gifted students could earn money in college by maximizing their brand value at a young age.

You can check out Triple H’s appearance below, in which he looks to be in excellent health once again:

“To allow college students to sort of monetize and utilize their name, image, and likeness. It has opened up an avenue for us. Thiss allows them to have that open door to earn money while in college,” revealed Triple H.

Triple H underwent emergency surgery in September and subsequently took some time off from his backstage duties. There is also some doubt over his in-ring status as he might not get cleared to wrestle another match.

Diamond Dallas Page feels WWE NXT Champion Bron Breakker is just as believable as Brock Lesnar when it comes to their in-ring work.

He believed Bron Breakker had all the makings of being a top talent and was particularly impressed by the star’s wrestling style. DDP saw similarities in Bron Breakker and Brock Lesnar’s approach in the squared circle as they both looked like credible performers during matches.

“I thought they killed it. The beginning was a bit slow, but they got a long way go. That second last half of the match – the cat (Breakker) is money. He’s believable – he’s as believable as a Brock Lesnar or any of those top guys, who are wrestling shoot-a**, bad*** wrestlers. And Brock is, of course, at the top of the foodchain,” said DDP.

Do you agree with DDP’s assessment of Bron Breakker? Also, will the reigning NXT Champion eventually get a match against the Beast Incarnate?

William Regal was one of the many backstage personnel released during the recent NXT cuts.

The NXT General Manager was a WWE employee for over two decades, and he thanked the company for a beautiful experience in his statement.

“Thank you to @WWE for a wonderful 21 year run. You gave a lad who was happy and in wonderland wrestling on a carnival have a charmed life for 21 years. No complaints and please no one waste time replying as I won’t have a bad work said against the company.x,” said William Regal.

Thank you to @WWE for a wonderful 21 year run. You gave a lad who was happy and in wonderland wrestling on a carnival have a charmed life for 21 years. No complaints and please no one waste time replying as I won’t have a bad work said against the company.x

William Regal also said that he would forever be grateful to WWE as he revealed how the promotion saved his life in 1999.

“I will add that @WWE saved my life in 1999 when they didn’t need to, kept my family fed and took me all around the world. You have my gratitude forever. You allowed me to live a charmed life,” Regal added.

I will add that @WWE saved my life in 1999 when they didn’t need to, kept my family fed and took me all around the world. You have my gratitude forever. You allowed me to live a charmed life.

William Regal was an influential figure in NXT as he helped shape the careers of multiple main event superstars. He has a great wrestling mind and will surely attract much attention from other companies.

Do you see William Regal joining AEW for a behind-the-scenes role, or even better, as an on-screen authority figure?

Share your thoughts in the comments section, and don’t forget to join us tomorrow for another stacked news roundup.