On the January 7th episode of SmackDown, WWE dropped a bombshell when they announced the reigning Knockouts Champion, Mickie James, as one of the entrants for this year’s Women’s Royal Rumble match.

Both companies managed to keep it under wraps in the age of social media, which made it that much more surprising. It does make one wonder if it’s a one-off or if there is a working relationship established between the two promotions.

For years, WWE has been guilty of not acknowledging their competition, and to suddenly witness them openly acknowledge IMPACT Wrestling on live television is remarkable. This does seem to suggest that the forbidden door might have finally been opened.

Well, well, well… congrats to @IMPACTWRESTLING Knockouts WORLD Champion @MickieJames and congrats to @WWE for finally walking through the forbidden door.
Welcome to the party!

The partnership between AEW and IMPACT Wrestling made for interesting viewing, which could be replicated this year with WWE. And what better place there would be to kick things off than IMPACT Wrestling’s first pay-per-view of the year, Hard to Kill?

So without further ado, let’s see which superstars from Vince McMahon’s promotion could potentially appear this Saturday at the pay-per-view.

Ha! Some may think The Club has split up. We've expanded, no one is safe! pic.twitter.com/EzRHXHYgr0

AJ Styles is one of the greatest superstars in the pro-wrestling industry and has achieved great success all over the world. He spent his younger years at IMPACT Wrestling by putting on all-time classics against the likes of Samoa Joe, Christopher Daniels, Frankie Kazarian, Kurt Angle, and many more. Styles left the promotion in 2014.

He recently had fallout against Omos and suffered a loss against him on RAW. Styles is feuding with NXT’s Grayson Waller as well. At this point, the veteran could use some backup, and who better than his buddies Doc Gallows and Karl Anderson — the current IMPACT World Tag Team Champions.

The Phenomenal One could show up at Hard to Kill and help them win the Hardcore War and reform The Club. In an exclusive interview with Sportskeeda Wrestling, Gallows sounded confident that Styles would return to IMPACT someday. Perhaps this could be it!

WWE Hall of Famer Edge was last seen together with The Edgeheads — Zack Ryder (Matt Cardona) and Curt Hawkins (Brian Myers) — on the 900th episode of WWE SmackDown.

Cardona is set to battle W. Morrissey and Moose in a three-way match for the IMPACT World Championship. Given the shared history between Morrissey and Moose, they might team up during the contest to eliminate Cardona from the equation.

#IMPACT kicks off 2022 with #HardToKill presented by the film #TheFreeFall

TOMORROW NIGHT, titles will be defended, feuds will be settled and more!

The Edgeheads helped The Rated-R Superstar retain his world championship on several occasions. So Edge might show up at the pay-per-view and help Cardona win the world title, returning the favor from all those years ago.

Myers could join them as well, thus completing another reunion. Imagine the six-man tag team matches that The Edgeheads could have against the likes of The Club, potentially acting as a foil for the eventual dream match between Edge and AJ Styles for Wrestlemania.

Don’t forget the singles matches that Edge might have against some of the top IMPACT Wrestling stars such as Moose, Chris Sabin, Josh Alexander, and more. The possibilities are endless!

Subscribe to @IMPACTPlusApp NOW and watch all your favorite classic IMPACT matches at https://t.co/5s5VXajN2T. pic.twitter.com/onPQWNMEXC

WWE Superstar R-Truth was once a member of the IMPACT Wrestling roster. He competed under his real name, Ron Killings, between 2002 and 2007. He was a two-time NWA World Heavyweight Champion and the first-ever African American champion in IMPACT Wrestling history.

R-Truth even competed in an Ultimate-X match at Destination X in 2005. The match also featured AJ Styles but was won by Christopher Daniels. Truth could show up at Hard to Kill in the first-ever Knockouts Ultimate-X match as a throwback.’

We OUT! Taking this European Championship to #SDLive #247Title #dancebreak pic.twitter.com/serHwHBkEb

These days, R-Truth’s obsession with the 24/7 Championship has taken him to places like golf courses, supermarkets, etc. An IMPACT Wrestling show could be next on the list. He might reach there by accident, thinking it’s a WWE show, and then get corrected by someone.

R-Truth can certainly pull it off with his comedic timing, making him one of the top picks to show up at the pay-per-view.

#3MB #3MB #3MB We love it when the @WWEUniverse chants that.. Because if you love us We love you.. pic.twitter.com/W4pf0VoO

Former WWE Champion Jinder Mahal is our next pick who could show up at Hard to Kill. Although The Modern Day Maharaja hasn’t competed in IMPACT Wrestling, he does have some connections in the company in the form of his old 3MB teammate, Heath Slater (now known as Heath).

He could potentially interfere in the Hardcore War and help Heath’s team win the bout in a bid to reunite with him. Jinder might encourage his former ally to use nefarious means to win matches while Rhino discourages them. It could lead to a feud, with Heath having to choose his loyalties.

Two armies turn their attention towards #HardToKill where they will collide in a match with no dqs, no count outs, plenty of weapons and anything goes! Its HARDCORE WAR! 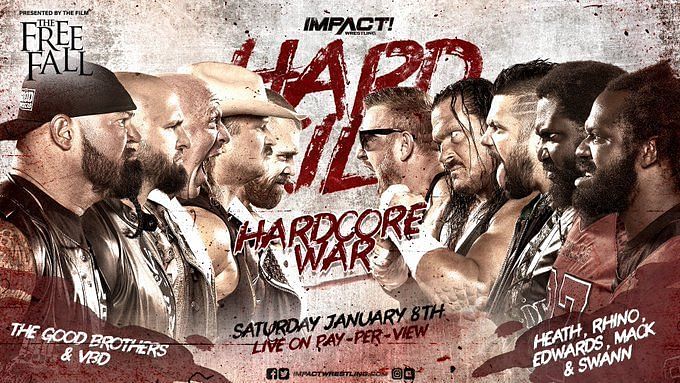 The whole situation could go in an entirely different direction as well, with Jinder inadvertently costing Heath’s team the Hardcore War. This could fire Heath up, leading to a feud between the former 3MB teammates.

We never got The Shield Triple Threat at Wrestlemania. So maybe upon Drew McIntyre’s return, we might get to see 3MB in a Triple Threat match at The Grandest Stage of Them All. Book it, Vince!

More roots than a forest, but that won't stop me from leave-ing you with a broken arm. @MickieJames @WWE @JCLayfield

When Mickie James returned to the WWE main roster in 2017, her first target was Becky Lynch. Dressed as La Luchadora, she provided valuable assistance to then-SmackDown Women’s Champion Alexa Bliss, helping her retain the title over Lynch.

Since then, a lot has changed; Becky is currently the RAW Women’s Champion and has dominated her division over the last few years. Courtesy of the forbidden door, she can show up at Hard to Kill and cost James her title match against Deonna Purrazzo, giving the veteran a taste of her own medicine.

James could then win the Women’s Royal Rumble, setting up a clash between her and Lynch at Wrestlemania. Both women had some good matches during James’ last run with the promotion. It would be great to see them go at it once again.

Furthermore, plenty of other stars, such as The Virtuosa in the IMPACT Wrestling Knockouts Division, can prove to be great challengers for Big Time Becks.